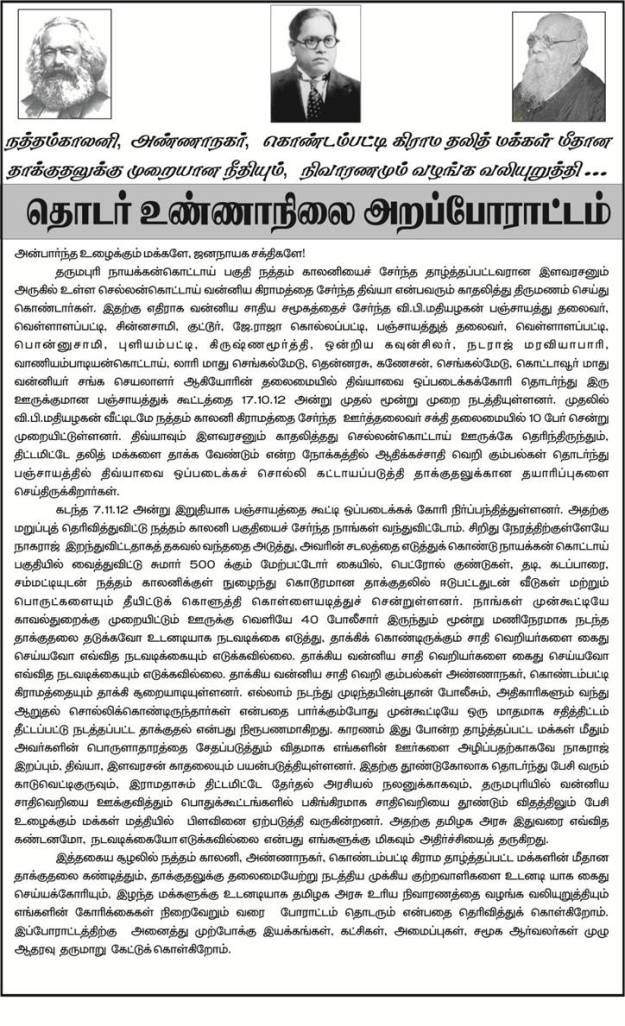 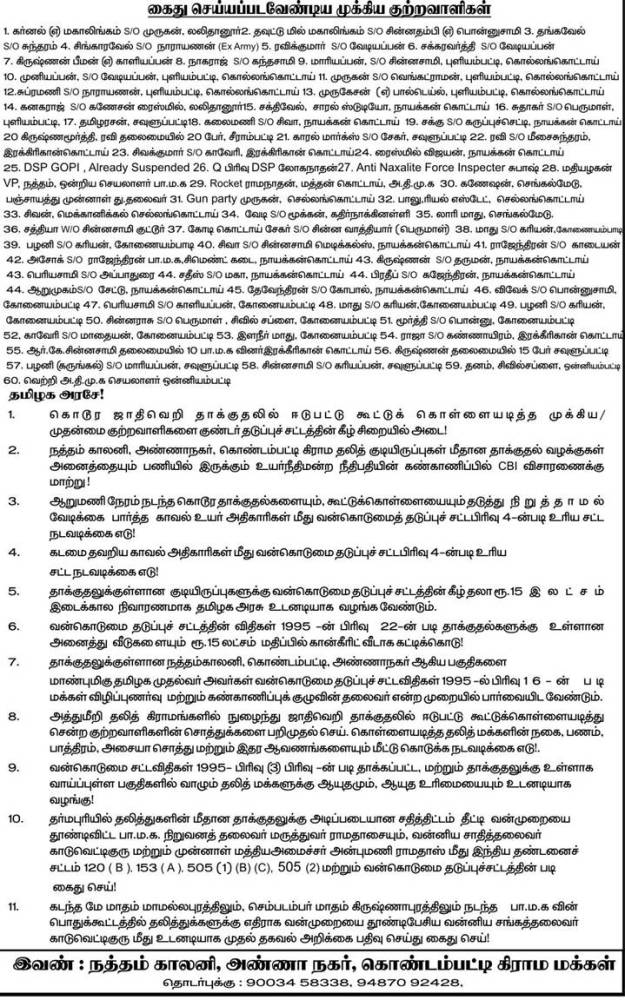 On 7 November 2012, up to 2,000 people attacked three Dalit settlements in the Dharmapuri District of Tamil Nadu in India, according to theInternational Dalit Solidarity Network (ISDN) with sources from The Hindu,IBN, Times of India and Countercurrents.

According to newspaper reports, a nursing student, from the Vanniyar (Shudra) community married a man from Aadidravida (dalit) community in the Natham Colony. After her father committed suicide in disgrace, mobs organized against the Dalit community. According to ISDN, the mobs came in the afternoon in vast numbers, looting Dalit homes and torching them with petrol bombs. Hundreds of homes were damaged and 1,500 Dalits left without shelter and belongings.

As Vidya Bhushan Rawat (@freetohumanity), a social and human rights activist, writes in Countercurrents in a post titled Caste And Honor:

The violence against Dalits in the Dharmapuri district of Tamil Nadu is a shocking reminder of social prejudices prevalent in our society and how honor is closely linked to our caste identity.

According to Rawat, “The newspapers have not reported the entire incident and completely ignore as who are the people who have attacked. It is important to identify the communities. It is open and unambiguous that the biggest violence against the Dalits in Tamiladu is inflicted by Thevars and Vanniyars, two major shudra communities lead by different political parties.” While this kind of violence is not permitted in the constitution, “violence against Dalits cannot evaporate with simple rule of law.”

Guriya & Desi Lal are Dalits or untouchables, part of the Harigans, the people in charge of cleaning the streets. Image by Yan Seiler. Copyright Demotix (27/9/2011)

Newspapers have also suggested that there have been nearly ten inter-caste marriages between Vanniyars and Dalits in this village, suggesting that the violence was incited for political purposes to prevent the threat of growing incidents of such cases in a systematic and ‘well-organized’ attack.

According to IDSN, Henri Tiphagne, executive director of the human rights organization People’s Watch, (an IDSN associate) traveled to the area to assess the situation and provide assistance to children, as he says, “It was the most shocking of caste atrocity incidents that I have seen in my life so far in terms of the effect of the incident – one inter-caste marriage that has been performed with police knowledge and protection resulting in violence with 430 houses attacked.”

Additional information about the incidents in Dharmapuri can be found at Sanhati in a post titled “Fighting Neoliberalism in Bengal and Beyond.”